The Underground Railroad, a vast network of people who helped fugitive slaves escape to the North and to Canada, was not run by any single organization or person. Rather, it consisted of many individuals -- many whites but predominently black -- who knew only of the local efforts to aid fugitives and not of the overall operation.

Still, it effectively moved hundreds of slaves northward each year -- according to one estimate, the South lost 100,000 slaves between 1810 and 1850.

An organized system to assist runaway slaves seems to have begun towards the end of the 18th century. In 1786 George Washington complained about how one of his runaway slaves was helped by a "society of Quakers, formed for such purposes." The system grew, and around 1831 it was dubbed "The Underground Railroad," after the then emerging steam railroads. 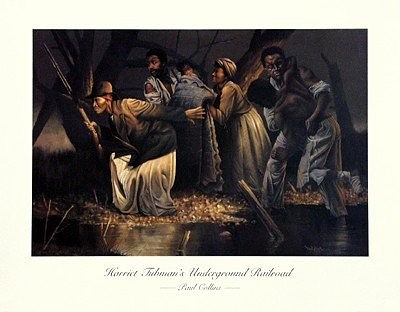 The system even used terms used in railroading: the homes and businesses where fugitives would rest and eat were called "stations" and "depots" and were run by "stationmasters," those who contributed money or goods were "stockholders," and the "conductor" was responsible for moving fugitives from one station to the next.

For the slave, running away to the North was anything but easy. The first step was to escape from the slaveholder.

For many slaves, this meant relying on his or her own resources. Sometimes a "conductor," posing as a slave, would enter a plantation and then guide the runaways northward. The fugitives would move at night. 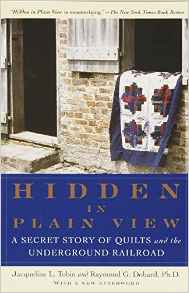 The fugitives would also travel by train and boat -- conveyances that sometimes had to be paid for. Money was also needed to improve the appearance of the runaways -- a black man, woman, or child in tattered clothes would invariably attract suspicious eyes.

This money was donated by individuals and also raised by various groups, including vigilance committees. Vigilance committees sprang up in the larger towns and cities of the North, most prominently in New York, Philadelphia, and Boston.

In addition to soliciting money, the organizations provided food, lodging and money, and helped the fugitives settle into a community by helping them find jobs and providing letters of recommendation.

The Underground Railroad had many notable participants, including John Fairfield in Ohio, the son of a slaveholding family, who made many daring rescues, Levi Coffin, a Quaker who assisted more than 3,000 slaves, and Harriet Tubman, who made 19 trips into the South and escorted over 300 slaves.

Curated by our travel partner BedandBreakfast.com, 20 historic inns have been selected and identified as critical nodes or links in the vast network system of The Underground Railroad. Rich in legacy, a brief history of these cozy destinations is provided. To book an inn click on the image or box